Thought for the day….”Life without liberty is like a body without spirit.”

“Obstacles are things a person sees when he takes his eyes off his goal.”

Autumn is a good time to get around to sorting the thousands of photos that are sitting on discs and hard drives.   Those of us over about 30 years old will remember that at one time, you only got 36 pictures (37 if you were lucky) on a roll of film, and even on a long holiday, you did not come back with thousands of photos.   But with digital cameras, it is far too easy to click away and end up with hundreds of photos.    I am looking back at my earlier photos and putting them through a test.   First question is “would I be proud to show this photo to somebody else? ”  and the second question “is this photo special to me?”    If the answer to both questions is NO then it is time to hit the delete button.   Rather like pruning trees after the summer, it will result in a leaner, cleaner and better photo collection.    Hit that delete button !

Classical buildings in the Frogner part of Oslo for the photo today, originally a colour photo that I have converted to Black & White.

and another photo, the lunchtime Wideroe Dash 8 Q300 aircraft arriving in Honningsvag, in North Norway.   This is only about 30km from the North Cape, which is claimed to be the top of Europe at over 71 degrees north.     That said, North Cape is actually on an island (Mageroya) so whether or not it is actually the northernmost point of Europe is debatable. 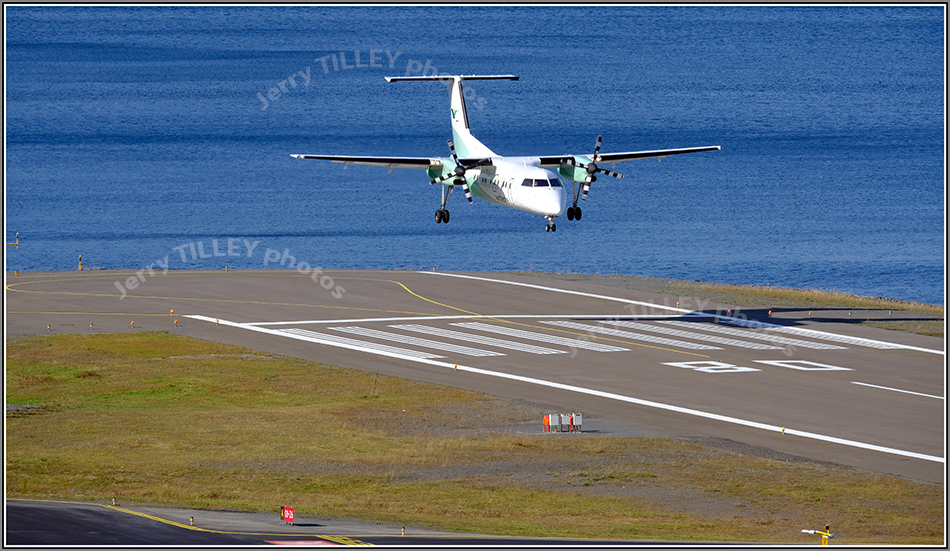 Think before you install……that app may not be so innocent

Thought for the day…”What happens is not as important as how you react to what happens.”

“If you are lucky enough to find a way of life you love, you have to find the courage to live it.”

It is amazing that so many people install apps on their mobile phones without any regard for just how much information those apps may collect. I recently wanted to install an app to control the flashlight on my mobile phone, but refused to install it when I discovered that it wanted access to my camera, email contacts and microphone. Absolutely no need for a glorified light switch to need access to my emails or the microphone on my telephone. And a second flashlight program proved just as bad.

Now there is the news on the internet about Amazon, and their plans to open physical stores in the USA. Apparently, they are going to monitor shoppers mobile phones, and will block their internet access if they attempt to check prices at other stores or online. So not only will Amazon be able to see what you are interested in, they will also be able to stop you comparing prices, and presumably, will also be able to see other sites on the internet that you are interested in. No doubt many people will quickly install a new Amazon app, without thinking about the loss of privacy. 50 years ago, people would have demonstrated against the idea of carrying something that gave authorities the power to see where they were within a few metres, and also what they were reading/eating/shopping/listening to. Even installing a flashlight app may now mean that somebody is listening to your conversations. Privacy is important, yet many people are now readily giving it up.

A photo from Spitsbergen of the Artic poppy flower, braving the cold weather…

and another photo….early morning in Riverton, in the far south of New Zealand.  At one time, this port received freight boats from Australia before the estuary silted up.  Now the railway and the larger boats have long since gone, leaving just the small fishing boats and a few tourists who pass through Riverton whilst driving the Southern Scenic Route. 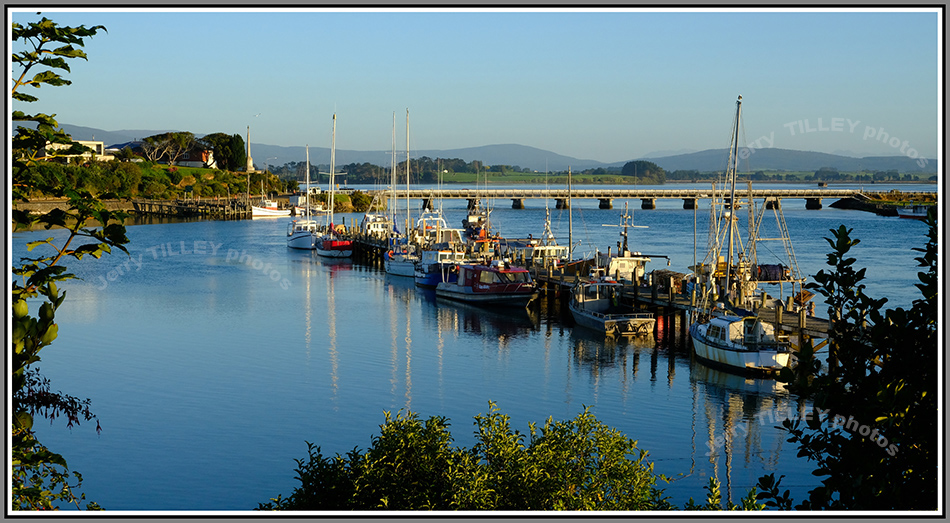 Thought for the day….”Success – keeping your mind awake and your desire asleep.”

“Sooner or later, those who win are those who think they can.”

Two photos from the opposite sides of the Earth….the first is a Tiger Moth aircraft seen here in Pembroke, New Zealand.   This type of aircraft was designed in the 1930s  by the De Havilland company, who went on to make over 8800 of them.   Many pilots learnt to fly in these, and they are still popular for teaching pilots their initial tail wheel training.   Typically, it had a 120hp Gypsy Moth engine, which required hand starting as there was no electrical system in the aircraft.    Top speed was 140 knots.

and another photo….the lunchtime Wideroe Dash 8 aircraft arriving at Honningsvag in Artic Norway.  The aircraft carries 50 passengers, and is often used in Norway on the ‘milk run’ service in northern Norway, stopping at many of the isolated towns along the coast. 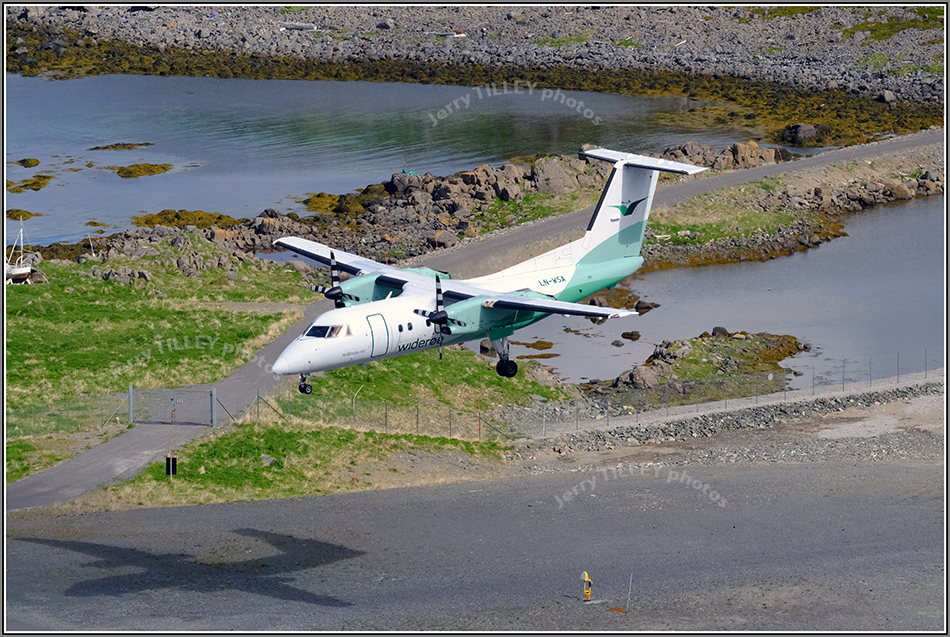 Thought for the day…”Hope is but the dream of those who wake.”

“You have succeeded in life when all you really want is only what you really need.”

Ever wondered what the inside of a jet engine looks like?   Here is a CFM56 engine uncovered.  More than 30 000 of these have been built, but it will set you back around USD 10 million for one. This one is an example from Air New Zealand, and was used in its 737 fleet.  At one time, AirNZ was a quality, full service airline (it even had the advertising slogan ‘Pride of the Pacific’  but nowadays it has changed into a budget airline which charges extra for add-ons, and also service levels onboard have fallen.   Sad to see a once great airline change so much.

But we customers are lucky to have a choice……I now avoid any flights on airlines that use 10 across seating on their 777s, and I am also checking the seating before making reservations…things like not booking on the newer Lufthansa A320NEO aircraft where they have put seats closer together (with even less legroom than Ryanair) and have removed one galley and toilet to squeeze in even more seats.    There is a limit, and some airlines have passed that limit for what is acceptable.  And if the airlines think that by making economy class uncomfortable that they will force me to upgrade to premium economy, then that is just not going to work….the answer is to choose another airline.    Their loss.

and another photo…Honningsvag in north Norway, high above the Artic Circle. 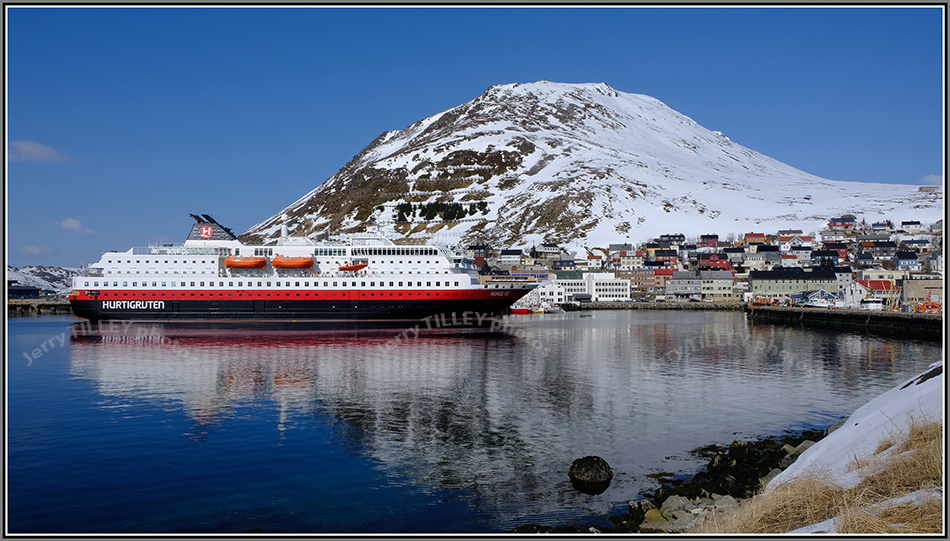 Thought for the day….”If we were meant to stay in one place then we would have roots instead of feet’

The photo today comes from Svolvaer, the ‘capital’ of the Lofoten Islands in Norway.   About 4500 people live in this town which was built on cod fishing.  Nowadays, summer tourism is very important with about 200 000 tourists visiting each year.   It is served by ferries from Bodo on the mainland and also by a regional airport.  Day trips operate from here to the nearby Trollfjord and also Rafsundet.  Being Norway, everything is VERY VERY expensive, making a holiday here a costly trip.   When a Norwegian is asked to name something that is cheap in Norway, they usually struggle to think of ANYTHING that is cheap.   The words ‘cheap’  and ‘Norway’  do not go together. 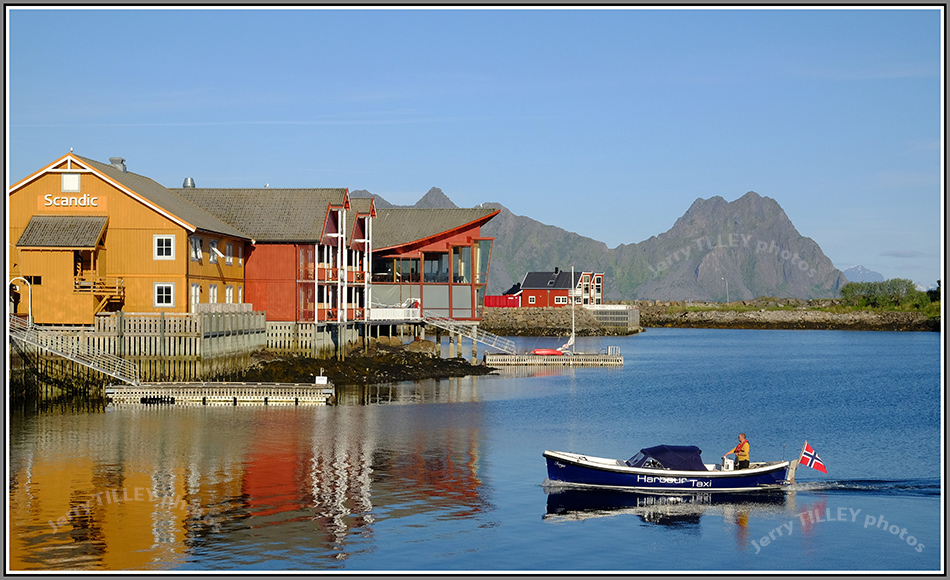 and another photo…..the very small village of Urke in the Norwegian fjords.  Both of the photos today were taken as jpegs using the Fuji X-T10 camera.

Buying decisions….to buy or not to buy, that is the question

To buy, or not to buy.   That is the question.   Having recently upgraded the camera to the newer Fuji X-T10 (great camera, and highly recommended), the finger is now poised over the ‘BUY’ button.  This time it is the new Fuji XF 100-400mm lens.   All the reviews have been great, and the people that have posted their comments praise the lens, so it is undoubtedly a wonderful lens.   I gave the lens a try in the camera shop, and it felt very good, and the extra zoom would be very welcome BUT here is the problem….the lens costs about 3 times as much as the camera did, and with the teleconverter, will cost around 2000 euros.    So the finger is hesitating on the ‘BUY’ button.    Quality always costs more, and the Fuji products are great, but the thought of almost 2000 euros on a lens is difficult to accept.  To buy, or not to buy, that is the question…..

A couple of photos from the north of Norway, taken with the standard 18-55mm Fuji lens on the X-T10.  The first photo is from the small town of Vardo, at the top of Norway. 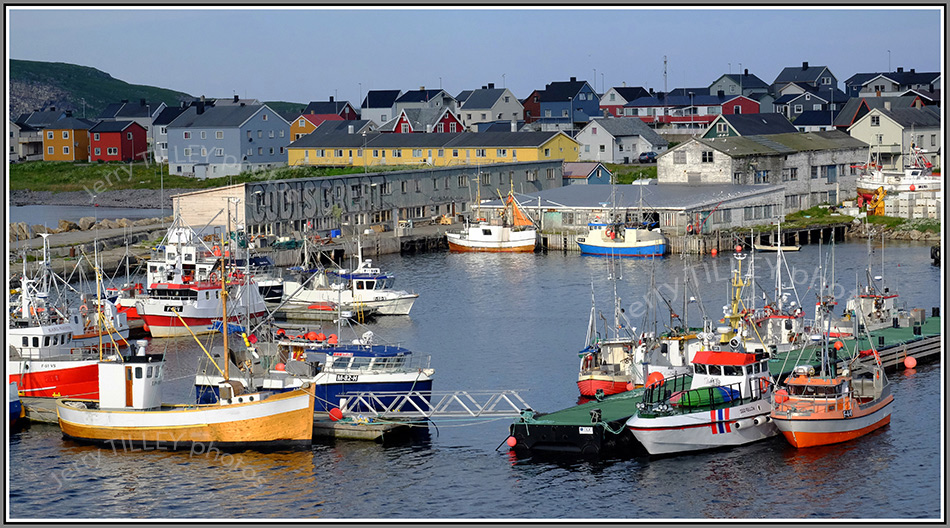 and another photo from north Norway…Hammerfest

Up to the top of Norway – Finnmark

Thought for the day….”You will never win if you never begin”.

“The purpose of life is a life of purpose”

Today’s photo is from the fishing village of Vardo, in north Norway at 70 degrees north in the province of Finnmark.   Vardo has three names, one in Norwegian, one in Finnish (Vuoreija ) and one in Sami (Várggát).  Russia is also just a few kilometres across the bay, and the island is now connected to mainland Norway by a 2.8km subsea road tunnel.  Vardo is also the name of the gypsy caravan used by romany gypsies in Britain.  Vardo has a history of witchcraft, including trials of witches and also a witchcraft museum.   Curiously, it also lies further east than either Istanbul or Kiev.  It also hosts the yukigassen, a snowball fighting competition.  The average annual temperature here is only 1.3 degrees, not helped by the long, dark artic winter in this part of Norway.

and a couple of photos from Oksfjord, near the top of Norway at 70 degrees north.  About 500 people live in this fishing village, although the fish processing factories have all closed.  As there are few roads in this part of Norway then ferries are an important way of getting around, including the daily Hurtigruten boats.  Hammerfest is the nearest major town. 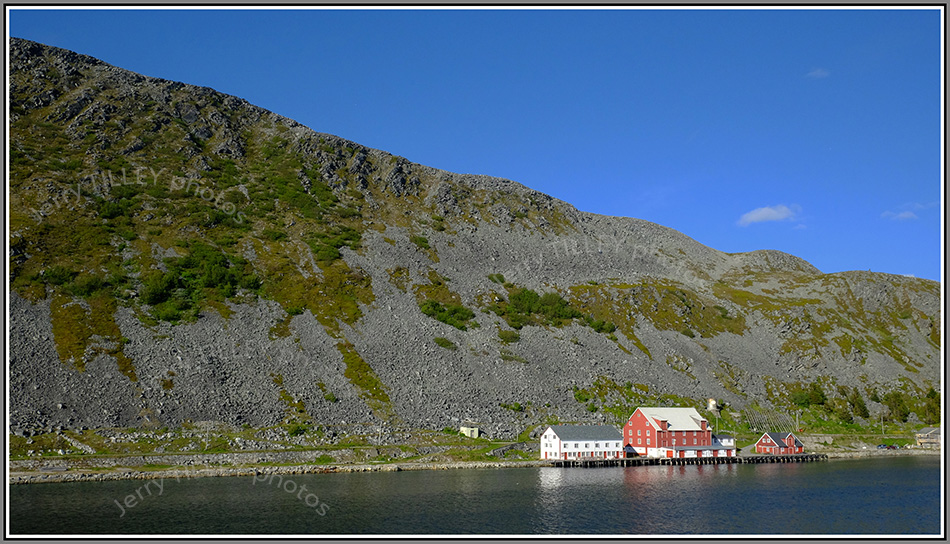 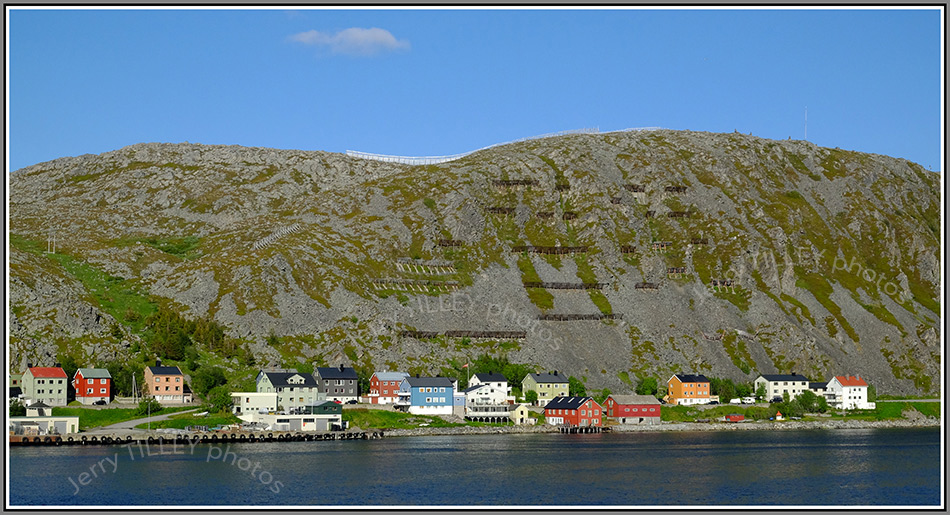 and another photo from the archives….a beach in the Seychelles islands…..

Before The Storm – Not the Quality Spa Resort Hotel, Norefjell.

Thought for the day….” Yesterday is history, learn from it.  Today is the present, act on it.  Tomorrow is the future, plan for it”.

“When the wind changes, pessimists will complain, optimists will hope for the wind to change, and leaders will adjust the sails”.

A photo today taken just before a storm, and just before the last bit of sunshine disappeared.  Taken in the settlement of Longyearbyen, Spitsbergen in the far north.   Originally a whaling station, it was the mining of coal that later became important.   Spitsbergen is shared between Norway and Russia, and both companies still have coal mines there.    There is even a branch of a Norwegian university there, to study Artic sciences.   Spitsbergen has a population of around 2700 people. although they are far outnumbered by the number of polar bears.   Due to the large number of polar bears, trekkers and hikers are required to carry a gun when outside of settlements.    There is also a Seed Vault here, a sort of domesday project to store seeds from every country in the world.  From Spitsbergen is is not far to the North Pole.