The worm has turned (at least for today)

Thought for the day….”When your work speaks for itself, don’t interrupt.”

“A certain amount of opposition is a great help to a man. Kites rise against, not with, the wind.”

I recently flew with Lufthansa from Oslo via Frankfurt to Zurich.    Apart from the usual rush to get onboard and the usual problem to get space in the overhead luggage bins, the seats on the A320 seemed even closer than before.   But the real insult was the ‘meal’ that was served onboard.  This is what Lufthansa, one of the legacy airlines, served as the ‘meal’…. 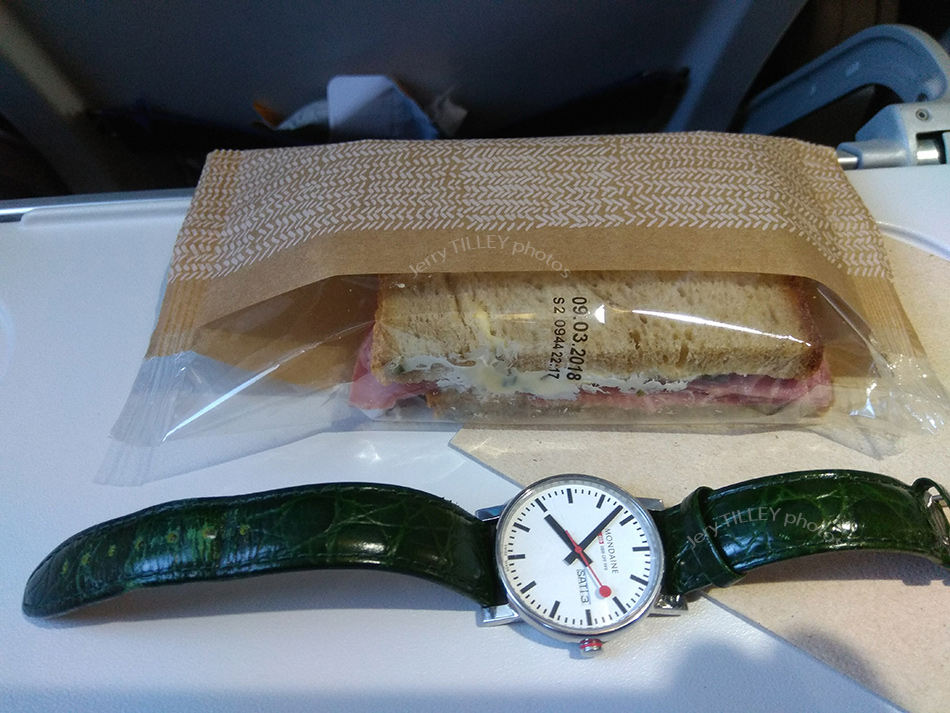 And not only that insult, but the coffee was served in micro size cups too (the watch is in the photos to give an idea of the small size) – 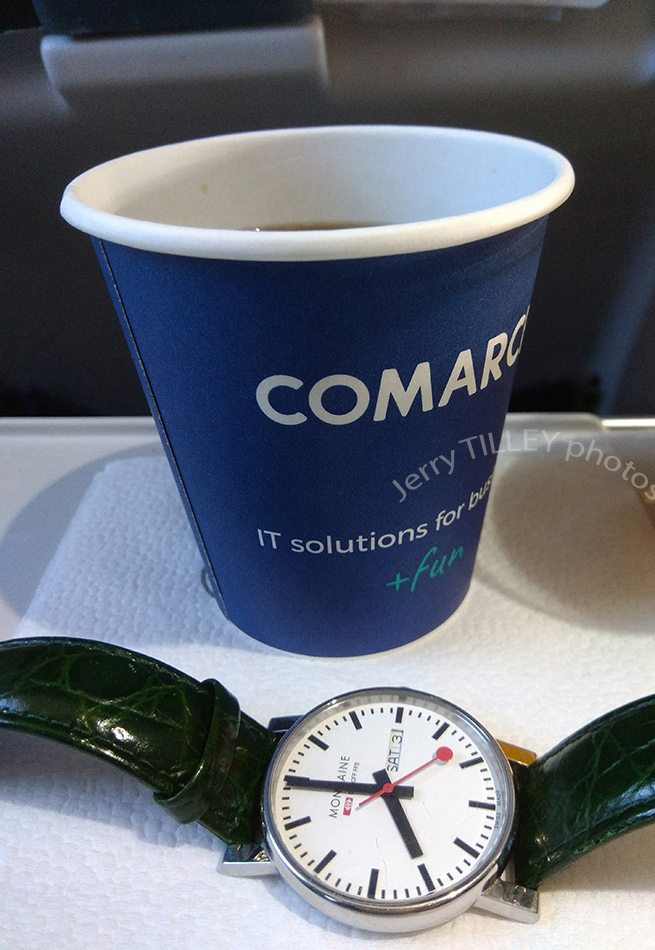 and the ‘dinner’ on the leg to Zurich was 20g, yes 20g of dry crackers.   Again, no refills of coffee offered, despite the small size.   I had paid an ADULT fare, yet was given these micro sized portions.   Can you believe 20g ??  Lufthansa have also been devaluing the air miles on flights too, so I wonder what is the point in paying extra to fly with the legacy carriers when the service has fallen this much???

BUT fast forward to my next trip to Zurich 3 weeks later.   I am lucky to be able to choose a lot of the time, so due to Lufthansa becoming less good, I chose the German Railways train instead.   What a breath of fresh air. No check in 1 hour before departure.   I could get onto the train carrying tubes of toothpaste, a Swiss army knife and liquids without anybody worrying.   The seats had lots of space.  I could take my own baggage (and be sure that it was going to travel with me on the same train).    The staff on the train were excellent, the coffee in the restaurant car good and in normal sized cups.    I had space to walk around, I had comfortable seats and there were films and TV programmes to watch on the DB entertainment channels.    Despite a much longer journey time, it seemed much faster than flying.  I arrived feeling good, relaxed and that I had enjoyed the journey.    We tend to forget that the train can be a great way to travel.    Just because air travel is fast does not mean that it is good, or that it is the only option.   The train down through Germany was so good that I am not considering using the train for many more future trips.    To quote a great British railwayman (Peter Parker) ..”this is the age of the train”.    Perhaps if airlines continue to pack people in and treat passengers as an inconvenience, then more and more people may discover the train.

No prizes for guessing where the photo below was taken…..yes, a souvenir shop !!   Typically Swiss.  Taken with the Fuji X-T20 camera together with the excellent 35mm F2 prime lens.

and another photo from the archives…..bright colours in Cape Verde Islands….

Great colours from the Fuji camera

“It is not the load that breaks you down, it is the way that you carry it”.

Norway has been enjoying some fantastic summer weather…with unbelievable temperatures, even in the far north.   Not only have there been many long, sunny days, but some days with wonderful clear air too.  Today’s photo comes from Svolvaer, the ‘capital’ of the Lofoten Islands, about half way up the long coast of Norway.   The photo was taken in the main harbour, and shows the traditional cottage that was previously used by fishermen, called a rorbu.  These cabins were traditionally built out over the water, so that boats could moor directly alongside.  Many of these have been converted into holiday homes, although the ones in this photo are actually part of a hotel.   At this time of year, there is 24 hour sunshine in this part of Norway, so even late evening it is possible to get photos like this.  Expect to pay around 200 euros a night for a typical cabin during summer.   Taken with the Fuji X-T10 camera and standard 18-55mm kit lens, with almost no editing of the photo.   Once again, great colours from Fuji.

and another photo from the archives…some great colours in Mindelo, Cape Verde islands….

570km off the coast of West Africa are the 10 islands that make up the country of Cape Verde.   Until 1975 they were a Portuguese colony, and are still also known by the Portuguese name of Cabo Verde.    About 525 000 people live there, including about 130 000 in the capital Praia.   Fishing and tourism are the main industries, although remittances from workers overseas make up a large part of the incomes there.  About 90% of all food is imported, party due to the semi-desert climate on many of the islands.

And the photo today comes from Mindelo, Cape Verde islands.  Simple use of bright colours and late afternoon sun….

and another photo from the archives….more colours but this time in Gambia…

Thought for the day….”  Success means winning the war, not every battle”.

”  To be the best, you have to compete and win against the best”.

Sad news from Ukraine!   I read online that in Ukraine that the authorities there have stopped a man calling himself  ‘Darth Vader’ from running for president.    His plans for Ukraine were to turn it into a ‘galatic empire’.   Despite his name of Darth Vader, he is normally an electrician by trade.    That story reminded me of the English politician known as ‘Screaming Lord Sutch, who was the leader of the Official Monster Raving Loony Party until 1999.   He holds the record for the number of elections that he stood in and lost (40 elections).  Other politicians in the Official Monster Raving Loony Party included ‘Mad Cow Girl’, ‘Howling Laud Hope” and ‘Catmando’.  Despite winning several local council elections, the party never did very well.   The political party’s last elected politican was ‘R.U. Seerius’ who served in South Derbyshire.

That just leaves the photo for today….and from the archives comes this photo of a fisherman in Mindelo, Cape Verde.   Late afternoon produced some wonderful colours as well as clear air.

Thought for the day…” A nation of sheep breeds a government of wolves.”

Did you know that the first digital camera was made by Fuji in 1988 (called the Fuji DS-1P), although engineers at Kodak had earlier made a camera that used a CCD (charge coupled device) ?  Digital cameras had evolved as a natural extension of the technology that had been developed for recording television programs, such as the VHS tape system.   In 1986 Kodak engineers made the first million-pixel sensor.  Even Apple joined the race, producing the ‘Apple Quick Take Camera 100’ in 1994.  At the other extreme, Fermilab built a 500 megapixel camera for use in telescopes, and the latest professional digital cameras are coming with 70mp sensors.  Progess.

Sometimes you need to take a lot of shots of the same scene in order to get one good one.  Today’s photo is just one of those situations, as it needed a lot of shots before the fishermen were in the correct position.   Timing was so important for this shot, which comes from Mindelo in Cape Verde Islands.  End of another day.

As always, comments are welcome, just find the comments box below and write. 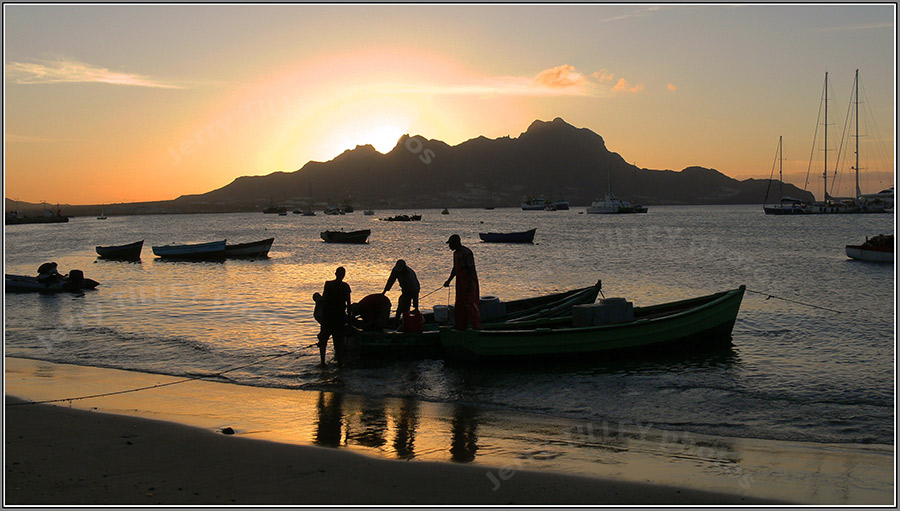 “The cure for love at first sight is often to take a sober look”.

I sometimes wonder if airlines are playing games.  I have been looking for air tickets, and also looking for the cheap offers.   Saw some good prices, but of course, when you try to book they are not available.   Then I tried one of the online websites that collects and compares airfares, found some prices that were ok, but between looking and going to the next stage, the prices had gone up by about 60 euros.    Not only that, but there were huge differences in the prices depending on what day of the week that you flew.   I cannot see the logic when the airlines are using the same aircraft on the same route why the prices should be SO different.   And I cannot understand why the price of the ticket depends on what time I look at the website and also which browser I am using.   I am tired of these games.  Clear, simple pricing would be much better.   And those airlines that are now charging for CARRY-ON baggage (as well as all the other extra charges) will not see me onboard either.

Off to the Cape Verde islands for the photo today…a group of 10 main  islands in the Atlantic Ocean about 575 km of the coast of Africa.   They were originally a Portuguese colony, and were an important stopover on the slave trade routes.   Around 500 000 people live in Cape Verde, with about a quarter of them living in the capital, Praia.   About a half million tourists visit every year outnumbering the number of locals.   The photo is of the harbour in Mindelo, on the island of Sao Vincente.

Photo of the Day Monday 2nd July 2012 – Nothing to do with the Quality Spa Resort Hotel, Norefjell

Thought for the day….” If you think nobody cares whether you’re alive or dead, try missing a couple of mortgage payments. “

Off to the islands of Cape Verde today, out in the Atlantic Ocean 570km off the western coast of Africa.  About 500 000 people live on the 10 main islands, with the main industries being tourism and the money sent back by citizens living abroad.   Despite the name, the islands are not especially green, and several of the islands are desert like.  This photo captures a local fisherman in the harbour at Mindelo.   Good light and an uncluttered background make this portrait successful.