Just had a domestic flight in Norway (on Norwegian airline) and once again, there was absolutely NO control over the number of carry-on bags that people were taking onboard, nor was there any control over the size of these bags.  It seems to be the rule now that if you can drag them (plural, as many people seem to be taking more than one bag now) then that is ok.     And even if the bags are too heavy for the people to lift then they are expecting the cabin crews to lift these overweight bags for them.    Not only that, but again today, inconsiderate people were trying to ram my bag with the force equivalent to a garbage compactor until their oversized bags would fit.    Why are airlines not enforcing the carry-on rules like they used to??    And with the new, higher density aircraft now (more seats squeezed in, but the same amount of lockers for baggage) then this problem will only get worse.   Airlines that charge for check-in (hold) luggage are also making the problem worse, as now more people will try and drag 2 or 3 pieces of luggage onboard.  But the word is consideration, something that was missing with a lot of the Norwegian passengers onboard DY761 today, and respect for other people’s property.

Some New Zealand humour….a sign outside a pub in Picton, New Zealand.

and another photo from the archives…..the national airline of Portugal arriving in Funchal, Madeira.

Thought for the day…” If we open a quarrel between past and present, we shall find that we have lost the future”  (Winston Churchill).

”  Laughter is timeless, imagination has no age, and dreams are forever”  (Walt Disney)

We all make mistakes, that is only human.  But what is wrong, and perhaps even criminal, is when companies make mistakes then are unwilling to put them right.    The latest example is by a Swedish based company called Cyberphoto, who trade online around Scandinavia.   Having ordered a new camera from them, I was told that it was on its way to me.  First mistake, as it was not.    So Cyberphoto had raised my expectations that I would soon receive my shiny new camera, but it was not to be.    When it did finally arrive, I saw that Cyberphoto had charged my card twice for the purchase.   I returned the camera due to the poor lens quality (Sony A6000, but the Sony 55-210mm kit lens was just too low a quality for the camera) but I am still waiting on Cyberphoto to refund my money.    It would not be so bad if Cyberphoto replied to emails promptly, but that seems to be too much for them.    So, at the moment, they have both my money and the camera.    And they seem to have gone very quiet too.

Making a mistake is not the problem, we all do that.  But what is wrong is when a company fails to put things right promptly.    Do Cyberphoto think that I would ever order from them again??    Indeed, unless they refund all my money very quickly then they are going to find a court summons landing on their doorstep.    Having been to court before (only as a plaintiff I must add) then I am not afraid to do it again, but it is a sad state of affairs when you have to do this.    But the way that this company is behaving, then it deserves to end up in court.  And they may well do.  Let the buyer beware.  And in this case, let Cyberphoto beware, because this particular consumer many just bite back, and bite back hard.

And another photo out of the archives….rope stall in a market in Mozambique…. 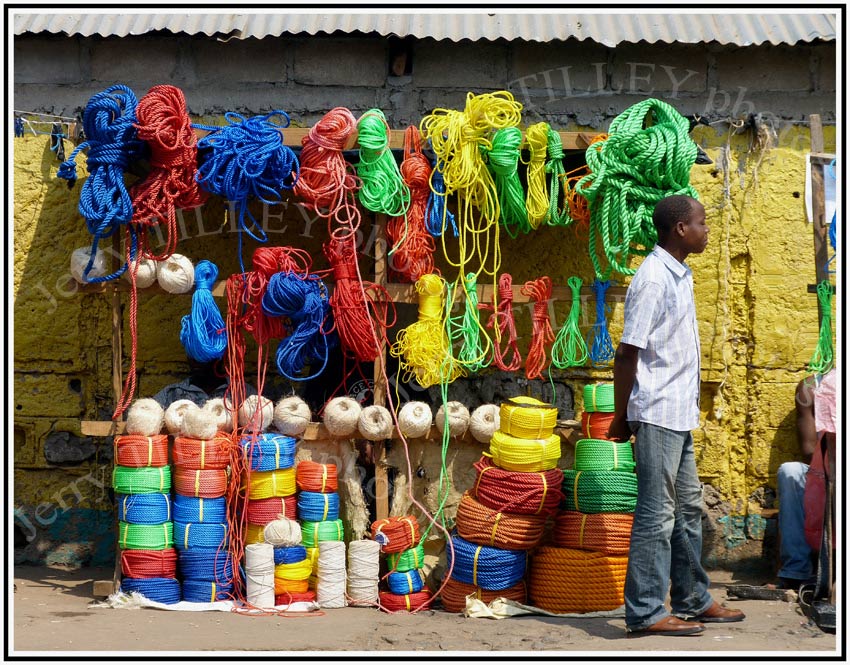