Two from the photo collection

Thought for the day….”Life always offers you a second chance. It’s called tomorrow”

“It is the set of the sails, not the direction of the wind that determines which way we will go.”

Winter is a great time to sort out the photo collection, and also get rid of the duplicates and not-so-good photos.    Far too many photos in the collection, so some serious pruning is needed, although it is a lot of fun going back through the old photos and reliving the moments.    A couple of photos here taken not long back, trains around Brienz, Switzerland.   Brienz is a Swiss town very much in the shadow of its famous nearby neighbour Interlaken, which receives nearly all the tourists.   But Brienz has its own charms, such as the steam train up the Rothorn mountain.   Add to this a superb lakeside location, some great bakery cafes and it makes a great alternative to Interlaken.    Both photos were taken with the Fuji X-T20 camera.

and another photo from the archives….

Thought for the day….” People who say that money does not buy happiness do not know which shops to shop in”. ” Adversity is the weight that strengthens us”. Back online after some internet problems, and another photo from the north of Norway, far above the Artic circle.   This photo is of Vardo, in the province of Finnmark.   As Finland is so close at this point, then it also has a Finnish name (Vuorea) and a Sami name, (Várggát).    Only a small population of around 21oo live here, although with the extremely long winter, then that is hardly surprising.  It has the honour of being the easternmost town in Norway, with Russia being not far away across the bay.     It actually lies further east (31 degrees) than Istanbul, Kiev or St. Petersburg.  Much of the land around is barren and treeless artic tundra.  Fishing and fish processing are the main industries here.   Interestingly, it is also the site of Globus II, a radar tracking station for space junk, although given that Russia is so near, then this station may also have other uses.  Vardo is one of the stops on the famous Hurtigruten coastal boat service in Norway. Another photo taken with the Fuji X-E1 camera.

and another photo from the archives….4 modes of transport in this photo from Cuba……. 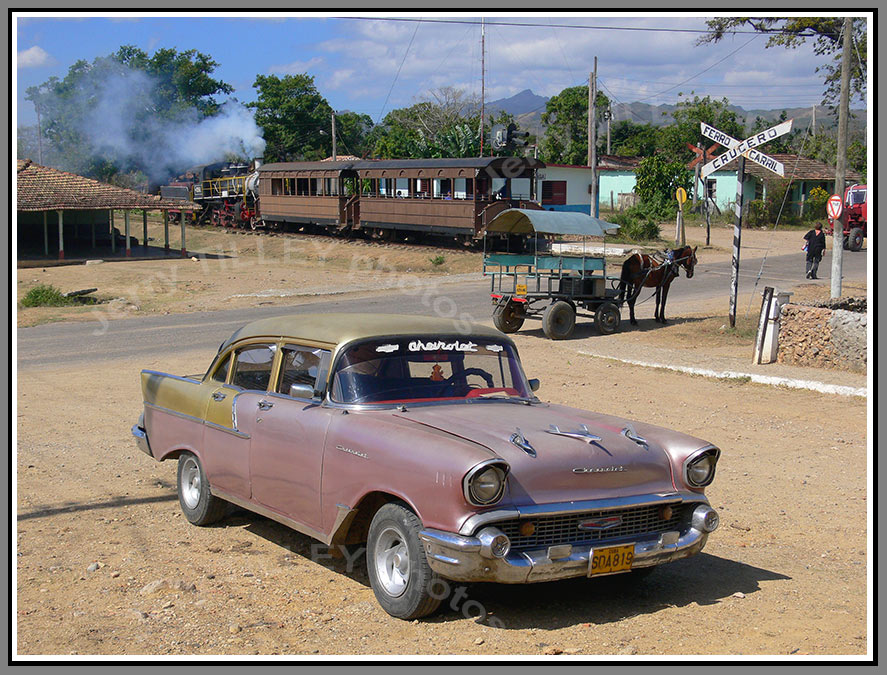 Thought for the day….” The biggest room in the world is the room for improvement”.

”  Happiness is a road to travel, not a goal to reach”.

Did you know that the original Swiss army knife was grey, not red?  And in the beginning, when the knives were made for the Swiss army, they did not feature a corkscrew because soldiers were forbidden to drink whilst on duty.  Apparently, on modern Swiss army knives, the corkscrew is the one part that is not made in Switzerland (it is manufactured in Japan instead).  The Swiss army knife started life in 1897 after being developed by Carl Elsener.   His idea was to manufacture something to stop emigration due to unemployment.  The design has been so successful that it has even been used in the Space Shuttle.  It is now possible to buy a Swiss army knife WITHOUT the knife part, so that it can be carried on flights (a knife-less Swiss army knife!) .   Wenger, one of the two main companies producing the knives (the other is Victorinox)  produces a knife known as ‘The Giant’, with some 87 tools included on it.    And here is a photo of one…which was on offer in Switzerland for CHF 1200……

One strange or odd fact about the Swiss army is that they accidentally invaded the neighboring country of Lichtenstein in 2007 after getting lost in a rainstorm !!

And a photo from the archives, this time from Cuba….4 modes of transport in this shot…..

Thought for the day….”Good management consists of showing average people how to do the work of superior people”
“Goals are like underwear, you have to change them once in a while to feel better about yourself”.

Did you know that the North Pole and South Pole have only 1 sunrise and 1 sunset each year?   And because the speed that the Earth rotates at is slowing down, the years are also getting shorter, around 400 million years ago a year was about 410 days, although the days were then only 21 hours long.   Even on the Equator, the days are not exactly 12 hours long, due to changes in the size of the sun and atmospheric conditions, and daylight can up to 7 minutes longer.   And due to the unusual orbit of the Earth, then the Northern Hemisphere has longer days than the Southern Hemisphere, with the sun being north of the Equator for 4 more days than in the Southern Hemisphere.  People who build sundials will also know about the Equation of Time, which is used to make corrections for the uneven spinning of the Earth.

Another steam train photo today, but this time the engine driver.   The photo was taken recently in Uppsala, Sweden during one of the weekend steam train specials, and is a timeless photo.  All aboard please!!

Age of Steam – Not the Quality Spa Resort Hotel, Norefjell.

Many people outside of Scandinavia have an idea that Sweden is modern, clean and efficient, with a well-developed social system.   Once you spend a little time there, and start to read the newspapers and watch TV, then you soon realize that Sweden is far from that image.   Immigration is a problem (there were riots again recently in the suburbs of the Swedish capital, Stockholm), with discrimination against immigrants increasing.  Swedes tolerate foreigners, but they do not accept them.   That is one reason that many immigrants are confined to certain areas of the larger cities.   You can see people sleeping on the streets, and even in the very centre of the Swedish capital, there are large numbers of beggars on the streets.  The number of people going through the rubbish bins in the cities shows that things are getting much worse.    The newspapers reveal stories of people sleeping in hospital corridors due to shortages of beds, waiting lists for operations and pensioners not receiving sufficient money for a good standard of living.    As for technology, Sweden is far behind some countries.   Some shops will not even accept credit cards, and the Swedes still demand paper forms and photocopies for almost everything official.   As for cleanliness, tourists are now surprised to see just how dirty parts of Sweden are.  The city centre in Stockholm is dirty, with rubbish, graffiti and general grime.  Public works seem to have been cut back far too much, and you keep noticing areas of decay and neglect.  Whereas Sweden might once have been something of a model to the rest of the world, it has changed, and it has changed a lot.   Some things have remained good, like maternity and paternity leave and benefits, but overall, Sweden has slipped a long way. Stories of Swedish trains halted due to snow and ice, recent bus strikes and increased bankruptcies also show things things have gone wrong in Sweden.  It is no longer a model society.

New made to look old for the photo today.   The photo is of a preserved steam train at Uppsala, Sweden on one of its weekend runs.   The original photo was taken in RAW, then converted to black & white, then changed to sepia.  Quite an impressive piece of machinery and nothing in the photo gives a clue that it was taken in 2013 instead of 1930. 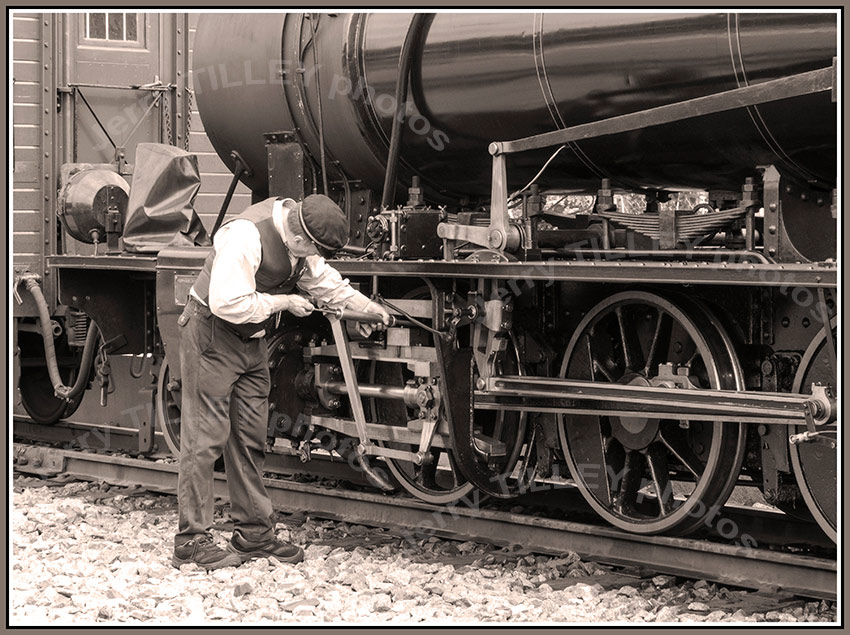 Thought for the day…..” Why is there only one monopolies commission?”

A photo today that looks like a black & white photo, but is actually a colour photo, but one where there is not a lot of colour!!!  It was taken early morning in Switzerland in Interlaken, with a morning fog from the nearby lakes.   A weekend special stream train was passing through on its way up to the resort of Grindelwald, and I was just lucky to be at the station when it was there.  Being Switzerland, even the steam trains run exactly to time!!!    About 347 million people use Swiss railways and its 760 stations each year.  There are over 3000km of track, making getting around Switzerland very easy. 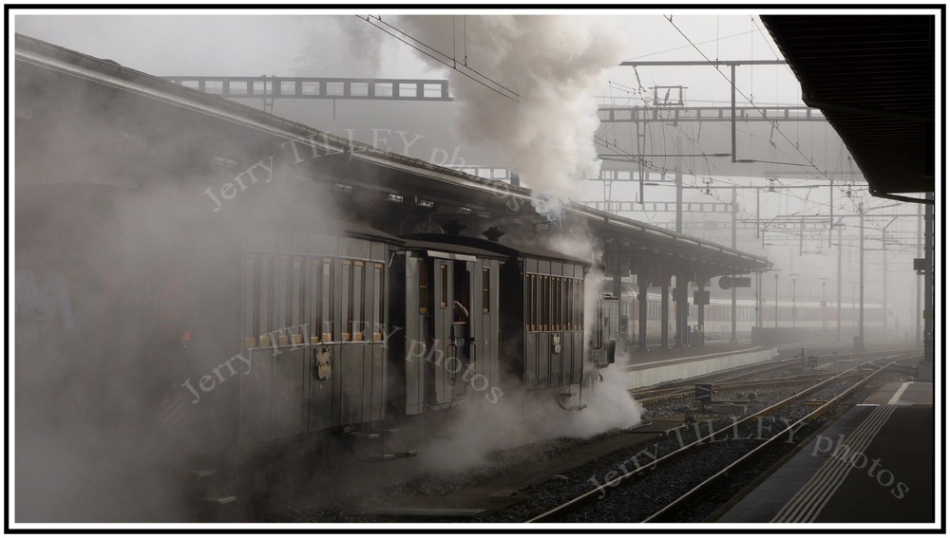