Thought for the day…”Reach for the stars, even if you have to stand on a cactus”

It is the set of the sails, not the direction of the wind that determines which way we will go.”

The joys of travelling….exciting new places and destinations.  But it is not always fun.   One of my pet hates (one of many) is that hotels often do not have a list of TV channels.   Given that some hotels can have upwards of 100 channels, why can they not put a list in the room to save endless channel surfing trying to find the 5 or 6 interesting channels??    A simple card or print out listing the channels would be so good.   And linked to this pet hate are hotel TVs that as soon as start them are at maximum volume, hardly ideal for a hotel when guests are trying to sleep.

Next pet hate……Many hotels are no longer giving the small bottles of shampoo and conditioner or individual soap, preferring to have dispensers on the walls instead.   All very well IF the hotel refills them but so often just when you are in the shower you discover that the dispensers are empty.

And staying with hotels and pet hates…..the annoying habit that more and more hotels are only putting in one rubbish bin/trash can in the whole room and bathroom.  Saves them a little money, but is hardly good for the guest experience.

Another hate….modern hotels whose managers have decided that THEY know the temperature that guests want the rooms to be at, and have removed individual temperature controls in the rooms….I am seeing this more and more and it is also not good for the guest experience.

Topping the list of pet hates for hotels…..any hotel that has slow internet or has a poor internet signal in the room deserves to go out of business….no excuse for this in the 21st century.    Excuses such as “it is the number of guests in the hotel” or “it is the rainy weather” just get me irritated.  It is not rocket science to get fast, reliable internet in a hotel, but it seems to be a major problem for some hotels.

Today’s photo is of the lakefront in Pembroke, South Island, New Zealand, on a perfect Summer’s evening.  One man and his dog admire the view…. 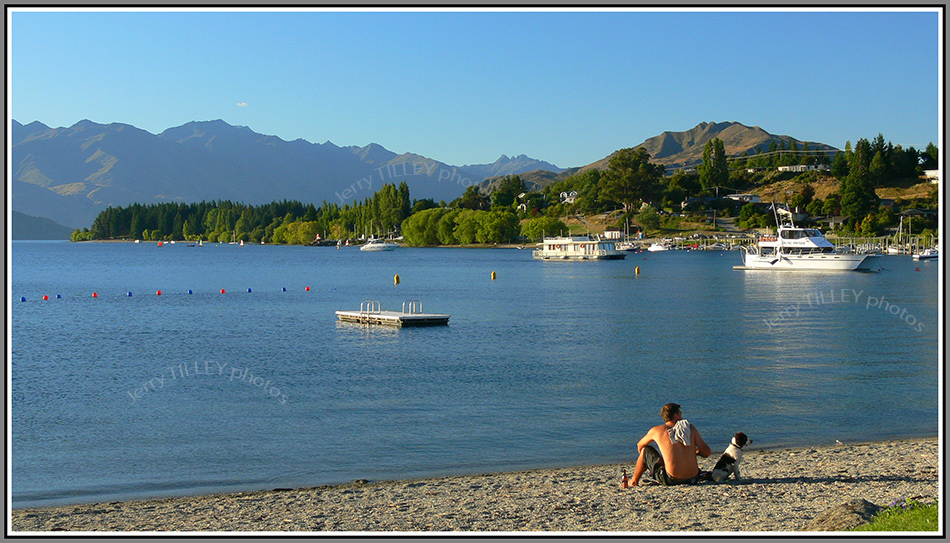 and another photo from the archives…..driving hazards on the roads of Scandinavia….these are a much bigger problem at night when they tend to freeze in the car headlights.   A male elk can be over 300 kg, so can cause a lot of damage to a car.

Thought for the day…”Chocolate is ground from the beans of happiness.”

“The man who is swimming against the stream knows the strength of it.”

Free Speech.   Something that is very important, but something that is disappearing fast in Europe.   Political correctness has already gone far to far, but now the online travel agency (OTA)  Booking.com   is also at it.

I recently stayed in some accommodation in Zurich which I booked online via Booking.com         The property was not good (badly run, dirty and with poor facilities) with poor security.   Not only was the property not clean, but it appeared to have many problems, one of which was what appeared to be asylum seekers in the accommodation.   So after my stay, I wrote a TRUTHFUL review to help other people in deciding whether or not to book.    One of the things that I wrote in the review was that the property appeared to house asylum seekers.    I did not make any statements about the rights or wrongs of this, nor did I mention nationalities, skin colour or race.    No references were made to immigration policies or criminality, just a statement that there appeared to be asylum seekers housed in the property.

But Booking.com   refused to publish my review because I had used the words ‘asylum seekers’  which they said could cause offense to some some people.   I would argue that the words described (truthfully) a situation, and were just reporting what I had seen and experienced.   Despite emails to Booking.com   the review did not get published.     So it seems that Booking.com   also want to be politically correct, even if this means distorting the truth.

The result of this….I cancelled a lot of future bookings with Booking.com     and now try to book direct with hotels etc. where this is possible.  I am not going to have Booking.com   tell me what I can and cannot say in a review.   It also makes me think that the other reviews on their website may also have been edited too.    So if you are reading reviews there then be aware that the reviews may have been edited for suitability.    George Orwell’s   1984 is here, just a bit late.   Booking.com    is in the same group as Priceline.com    and Agoda.com

Today’s photo comes from Glendhu Bay on the South Island of New Zealand.    The valley in the photo was until recently one of the homes of the Canadian country-pop singer, Shania Twain.  Nearby is Mt. Aspiring National Park and the Southern Alps.

and another photo from the archives….a SRN-4 hovercraft seen here in Boulogne in France.  These hovercraft had a top speed of 154 km/h and crossed the English Channel in as little as 22 minutes.  The record is held by the hovercraft in this photo, the Princess Anne.

Think before you install……that app may not be so innocent

Thought for the day…”What happens is not as important as how you react to what happens.”

“If you are lucky enough to find a way of life you love, you have to find the courage to live it.”

It is amazing that so many people install apps on their mobile phones without any regard for just how much information those apps may collect. I recently wanted to install an app to control the flashlight on my mobile phone, but refused to install it when I discovered that it wanted access to my camera, email contacts and microphone. Absolutely no need for a glorified light switch to need access to my emails or the microphone on my telephone. And a second flashlight program proved just as bad.

Now there is the news on the internet about Amazon, and their plans to open physical stores in the USA. Apparently, they are going to monitor shoppers mobile phones, and will block their internet access if they attempt to check prices at other stores or online. So not only will Amazon be able to see what you are interested in, they will also be able to stop you comparing prices, and presumably, will also be able to see other sites on the internet that you are interested in. No doubt many people will quickly install a new Amazon app, without thinking about the loss of privacy. 50 years ago, people would have demonstrated against the idea of carrying something that gave authorities the power to see where they were within a few metres, and also what they were reading/eating/shopping/listening to. Even installing a flashlight app may now mean that somebody is listening to your conversations. Privacy is important, yet many people are now readily giving it up.

A photo from Spitsbergen of the Artic poppy flower, braving the cold weather…

and another photo….early morning in Riverton, in the far south of New Zealand.  At one time, this port received freight boats from Australia before the estuary silted up.  Now the railway and the larger boats have long since gone, leaving just the small fishing boats and a few tourists who pass through Riverton whilst driving the Southern Scenic Route.

A modern day folly, and at a cost of 285 million GBP

Thought for the day….” Do not look back, you are not going that way”

“Life is like riding a bicycle.  To keep your balance, you must keep moving”  (Albert Einstein).

The island of St. Helena is probably most famous with stamp collectors.   The tiny island in the Atlantic Ocean lies about 1950km west of the African coastline.   The population is about 4500 people, which makes the spending of 285 MILLION British pounds on a new airport rather surprising.   St Helena is a British territory but the spending of such a large amount of money was done without sufficient surveys.  The runway is subject to turbulent winds and wind shear, and operations have been judged to be dangerous.   So despite spending a huge amount, only 18 aircraft have been able to land there due to the turbulent wind condtions and wind shear.      So the British government is left with a huge bill for an airport that is considered too dangerous to fly into.   But what will happen to the officials who ordered the building of this white elephant?   I can guess.  Zero.   A modern day folly.

A photo from the South Island of New Zealand, and the state highway 8 over the Lindis Pass.   At this point the road climbs to 971m before dropping down to the Ahuriri or Lindis Valleys.   The special long, spiny grass which grows in this area is known as tussock grass (see lower right of the photo). 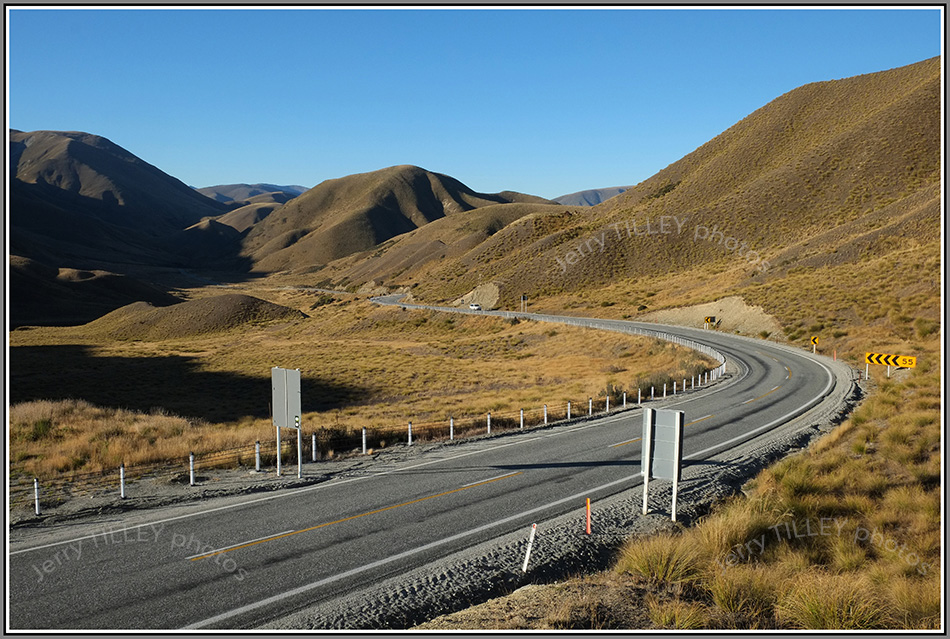 and another photo from the archives….legs plus.  The legs on the far left are real.