An aviation classic – the Hawker Hurricane

“Turn your face to the sun and the shadow falls behind you”.

Wanaka, New Zealand hosts the Warbirds Over Wanaka airshow every two years, and was at one time, also home to a number of Warbirds, such as this Hawker Hurricane.  This particular aircraft had an interesting history, having flown in 1940 and crashed in Preswick, Scotland, then after a rebuild was damaged several more times before being transferred to the Soviet Air Force in 1941.  It crashed again near Murmansk, Russia in 1943 and was recovered around 1990 and partly rebuilt in the UK from 1992 to 1995.  It was fully restored in Wanaka and flew again from Christchurch, NZ in January 2000.    It was later sold to a French owner based in Cannes.   The photo was taken in Wanaka about 2010 prior to the sale to the new owner.

And a photo from Oslo harbour in Norway.   The DFDS ferry travels overnight down to Copenhagen, Denmark.  Unfortunately, journey times have been increased now and prices onboard are very high, making it much less attractive than previously, especially when the highway down through Sweden is a fast alternative.  Why management wanted to slow the trip down is a mystery, as the boat is now much slower and leaves both cities too early to be much use to business travellers or people wanting a full day trip.

Worse service on the airlines, and more to come

Thought for the day…”The envious man grows lean at the success of his neighbour.”

“Hope is such a bait, it covers any hook.”

It is amazing that so many people are still choosing to fly with airlines, as a new round of cuts in services are leaked in the press.  The Hong Kong based  Cathay Pacific Airlines has announced that it too will follow the trend and squeeze in 10 across seating on its Boeing 777 services (the aircraft was designed for 9 across, so the change to 10 across will mean even less shoulder room).  There is also talk about going to 11 across onboard the A380, with the same result, less shoulder room for passengers.  And following on from that announcement, it seems that the Lufthansa group will move towards a ‘buy on board’ system for food.   It is being trialed at the moment, and apparently SWISS airlines (part of the Lufthansa group) are also going to trial a buy on board system.    Here is an example of one of the ‘meals’ that was served on a Lufthansa flight not long ago…about 100g of cheese and bread.   No plate, no meat and no other food.

So even before they start charging for food onboard, then they had almost cut out the included ‘meals’.  Earlier there was the news that British Airways were going to reduce the seating pitch onboard, meaning that their passengers would have LESS leg room than those on Ryanair.    And Lufthansa have also followed the trend by squeezing in more passengers on their new Airbus A320 NEO aircraft.   They have also removed one of the toilets (to fit in more seats) and made the remaining toilet even smaller.   Less leg room, less shoulder room and now even less food onboard.     The airlines mileage/frequent flyer programmes have been devalued so much that they are now virtually worthless, so the question is, is there any point now to choose one of the original airlines over the budget alternatives? Seems not.   You often have to pay for checked-in baggage, advance seat selection and a higher basic ticket price on thee traditional airlines anyway.    So why choose them?????

In most other businesses, giving a poorer service would usually drive people away, but it seems that the airlines are an exception.   Poorer service now, but still increasing numbers of people wanting to fly.  One thing is sure, the airlines that have increased the seating to 10 across on their 777s will not be seeing me onboard.   The limit has been passed.  Economy class has become a test of endurance, and is far from a pleasure now.

Staying with the theme of aviation, a photo that is now history, an AirNewZealand 747, seen here at Brisbane airport in Australia in 2004

and another photo from the archives….a local man in Southern Oman….

Up In The Air – Two classics of aviation

Thought for the day….”Don’t look back, you are not going that way”

“If you are not meant to have midnight snacks then why is there a light in the fridge?”

A couple of photos from the recent Warbirds Over Wanaka airshow, held at Easter this year in Pembroke Wanaka, New Zealand.   The first photo is the Supermarine Spitfire.    Designed by R.J. Mitchell, it came into service in 1938, and was in production throughout the second world war.   About 53 Spitfires are still in flying condition.   Over 20 300 Spifires were made, and they remained in service until 1961.    This particular aircraft carries a registration to commemorate the New Zealand pilot Alan Deere.

The second photo is the Messerschmidt Bf 109, which was used by the Luftwaffe in Germany during the second world war.   It entered service in 1937, with around 33 000 being made.   At least 10% were lost in take-off or landing accidents.

Both aircraft performed displays during the 2 days of the airshow.

Warbirds Over Wanaka – the preparations

It is almost time again for the Warbirds Over Wanaka Airshow, held around Easter every 2nd year.    Today there were a few historic aircraft at the airport in Wanaka, so I had to stop and take a few photos.   Sadly the weather forecast is not good for the next few days, but hopefully it will improve enough to get some better pictures.    Ticket prices for the airshow have shot up over the last few shows, which might be one reason why the number of people visiting the airshow has gone down to about half of what it was previously.   A few photos from today…..starting with the Vought Corsair…..followed by the Curtis Kittyhawk….. 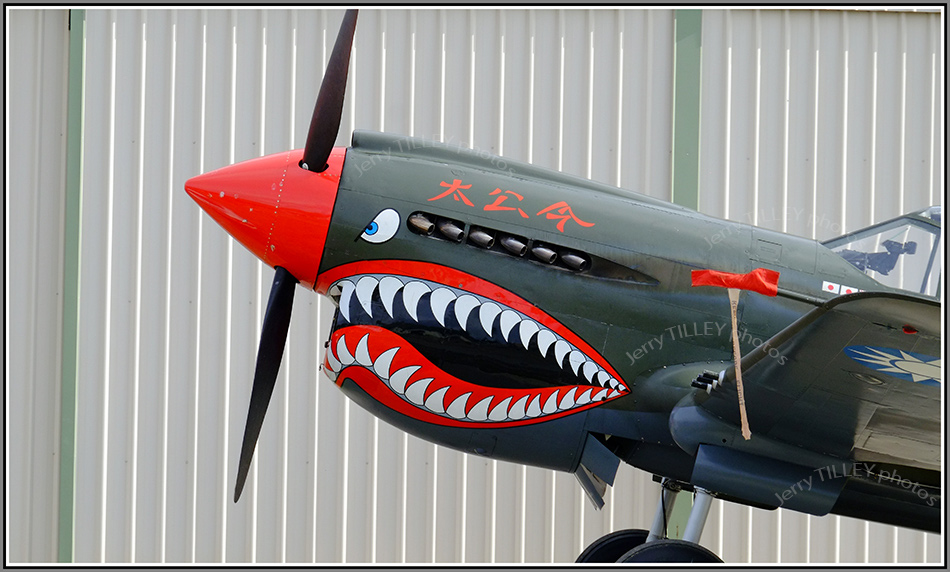